The company, which manufactures asphalt maintenance equipment, started as a two-person operation in a pole barn in Leonard in 1984 and moved to North Branch in 2007. KM International currently operates 36,000 square feet. with 47 employees.

Cliff Cameron, president of KMI, says his company currently has eight vacant positions and plans to add an additional 10 to 15 employees when the expansion is complete. He added that his company’s starting wage for unskilled workers is “$ 14 an hour and we’ll train them.”

â€œWe want to keep building – building our business, our team and our community,â€ Cameron said.

The â€œinternationalâ€ in the name of KM International is no exaggeration as they have sold their asphalt hot box machines in 48 different countries as well as all 50 states. They are currently producing an order for 40 of their KM 8000THDD units for the New Jersey Department of Transportation. The KM 8000THDD is a four ton trailer mounted asphalt reclaimer capable of maintaining asphalt temperature for up to three days.

The footprint of KM International’s expansion seen by an aerial drone. The exterior wall of the current building seen here will be removed when the walls are erected on the expansion, creating a factory floor of over 50,000 square feet.

KMI’s equipment, which is used by municipalities and commercial construction companies for cost-effective road repairs, has been featured in industry magazines. Cameron was recognized by his industry peers with an induction into the Pavement Hall of Fame in 2020. 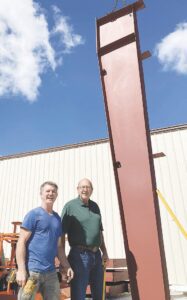